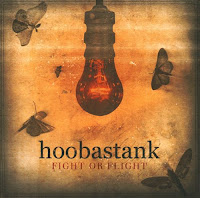 To be honest, Hoobastank has spent much of their career attempting to get out from underneath the shadow cast by their monumental 2003 single “the Reason.” But unlike other bands to suffer from this affliction, say, for example, Plain White T’s, and their massive hit “Hey There Delilah,” who seemingly couldn’t recover, Hoobastank has been slowly but surely clawing their way out of the stylistic grave since 2006 (Every Man For Himself was painfully underrated - listen to “the Rules” and “Born to Lead”). Their latest, Fight Or Flight, marks their best album in a decade, and is the record to rescue them from the brink of aural ambiguity. It’s a rousing, perhaps long awaited, return to form for the band, one full of glistening radio rock driven by a host of stirring mid-tempos (“You Before Me,” “Can You Save Me?”) that not only showcase frontman Douglas Robb’s near unparalleled emotive delivery, but also the bands uncanny penchant for lingering melodies. Rest assured however, in typical Hoobastank fashion, there is some bite to go along with all of harmonic pomp and circumstance (“This Is Gonna Hurt,” “The Fallen”). If you’ve hopped off the Hoobastank bandwagon over the past decade, it’s time to get back on while there’s still room, and Fight Or Flight is a damn sure good reason why. If this album is a sign of things to come for this band, a return to prominence shouldn’t be too far off.