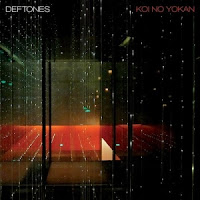 OK, I’ll get into it a bit. The 7th installment of the Deftones album collection, Koi No Yokan, is one of, if not the, best to date. They have proved that they have not grown weaker with age, and if anything, they have gotten better and stronger, mastering the music that they have been creating for the better part of two decades. From start to finish this is one of the most mesmerizing albums ever.

From the opening riffs of “Swerve City” to the soothing, almost funky bass lines of closer “What Happened to You,” Koi No Yokan does not ever cease to amaze. There are many words that come to mind when trying to describe the album, such as heavy, riffy, melodic, etc, etc. If I had to choose one word it would be intimate. From the English translation of the album title, ‘Love at first site,’ to the lyric “from the day you arrived/I remained by your side” in “Entombed,” intimate is the one word to describe the album.

Another key factor to Koi No Yokan’s amazingness I would have to say is the albums layout. It’s a roller coaster ride of neck straining and vivid melodic sing-alongs. That is if you can hit the notes frontman Chino Moreno does. Like on 2010’s Diamond Eyes, he gives us yet another example that he is more than just throat tearing screams and whispers. For instance, during the hook in “Romantic Dreams,” he gives us a taste of exactly that.

They also had new bassist Sergio Vega do more of his own thing while writing, which gives this album a slightly different feel than past albums with Chi Cheng. Vega has a very eclectic way of playing and I don’t think anyone else would have been better suited for this album. And speaking of, Abe Cunningham is still at it behind his drum kit making some of the coolest beats ever. Letting us all know that, yeah, this shit is serious.

I was fortunate enough to catch the Deftones in Philadelphia back in October and catch some of the new tunes live. These guys really have not shown any signs of aging, and as a matter of fact they sound the best I’ve heard in years. Do yourself a favor and drop what you’re doing and go pick up Koi No Yokan. You won’t be disappointed.