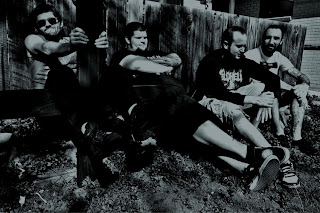 Relapse Records is extremely proud to announce the signing of Boulder, Colorado hardcore/grind/punk quartet Ironhorse. Ironhorse (Gordon Koch - Drums, Alex Pace - Bass, Steve Vanica - Vocals, Patrick Alberts - Guitar) formed in late 2011 and quickly made a name for themselves in the local scene, playing shows with heavy hitters like Gaza, Elitest & Cattle Decapitation. The band recently wrapped up recording their furious, hard-hitting debut Dragged Down a Dead End Path in Salt Lake City at the Boar's Nest with Andy Patterson which will see an early 2013 release via Relapse.

The album’s opening track “Failure” can be downloaded for free via the Relapse Records Winter 2012 Sampler at this location while a preview of the cover art can be seen here. More details on the album will be announced shortly.

Ironhorse plan to kick teeths in across the nation and tour heavily throughout 2013 in support of the album. The band commented on the signing:

"We are honored to be a part of a label that not only puts out a lot of great new music, but also put out the music that inspired us to be musicians and play live."
Email Post
Labels: ironhorse relapse records signing