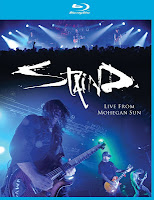 Though Staind’s Live From the Mohegan Sun is about as good a setlist as you could possibly expect from this band presently, though as you’ll realize throughout this live offering, there is something a bit off. Frontman Aaron Lewis’ voice is a bit lacking, especially when he delves into his (formerly) trademark growls and screams, most notably on classics (in the Staind fanboy pantheon) like “Spleen” and “Crawl.” Those tracks make up two-thirds of the trio of such included off of the bands brilliant debut Dysfunction, along with set closer “Mudshovel.” It’s criminal that the band didn’t include the unbelievable “Just Go,” but beggars can’t be choosers. The old material is balanced smartly by some of the bands best new cuts (“Throw It All Away,” “Eyes Wide Open,” “Paper Wings”) as well as the obligatory throw-ins (“It’s Been Awhile,” “Outside”). Aside from some issues with Lewis’ voice here and there, the rest of the band sound spot on as they clamber through many of their best songs. The DVD version includes a bonus song – “Country Boy,” taken off of Lewis’ debut solo country album Town Line – as well as a couple of other bonuses in an interview with the band and a special one-on-one with guitarist Mike Mushok and his live rig and gear. If you had to decide between the DVD and the CD versions for some reason, choose the former, though you’ll want to own both mediums to be honest.