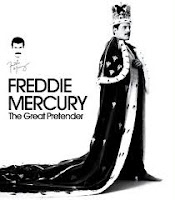 As you well may know, the trials and tribulations of Queen have long been well documented throughout the years, which is why Freddie Mercury: The Great Pretender, whose primary focus is Mercury’s oft-overlooked solo work, is so damn refreshing. Right off the bat, the story of the ill-fated collabo between Mercury and Michael Jackson is explained, and this is one story you do not want to miss. Let’s just say there is a llama involved somewhere. A timeless highlight of Freddie Mercury: The Great Pretender is footage of Mercury performing the iconic “Bohemian Rhapsody” with the Royal Ballet. Again, another piece of Freddie Mercury: The Great Pretender you do not want to miss, a statement that you’ll find perhaps overused a bit here. A considerable chunk of this doc is dedicated to Mercury’s time with Spanish opera star Montserrat Caballé. Interviews with Queen members Brian May and Roger Taylor, band manager Jim Beach, and composers David Arnold and Mike Moran, as well as Mercury himself are mixed in throughout, and speaking of footage that isn’t to be missed, viewers are also treated to a short snippet of Mercury and Rod Stewart singing a demo of their collaborative effort “Take Another Piece of My Heart.” Freddie Mercury: The Great Pretender spends a lot of time unearthing never before seen looks into the life of Freddie Mercury, and even though there is some material here that’s been previously covered elsewhere, it remains essential.