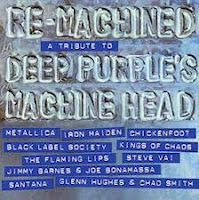 Could you imagine bands like Iron Maiden, Metallica, Black Label Society and the Flaming Lips (one of these doesn’t belong) performing Deep Purple songs? Well imagine no more and go pick yourself up a copy of Re-Machined: A Tribute to Deep Purple's Machine Head, a tribute album that’s part of the 40th anniversary of Purple’s Machine Head, originally released back in 1972. The album features two entirely different version of the bands classic “Smoke On the Water,” the opening track, provided by Carlos Santana and Papa Roach frontman Jacobbi Shaddix, and the other, from the complete opposite end of the sonic spectrum, contributed by avant-garde masters the Flaming Lips. The former takes a more traditional route to the timeless wonder, while the latter offers something of a break from the guitar fueled intensity that for the most part drives Re-Machined: A Tribute to Deep Purple's Machine Head. Black Label Society’s Zakk Wylde pays proper tribute to Ritchie Blackmore’s stunning lead work on “Pictures of Home,” Iron Maiden applies a coat of Iron Maiden paint to “Space Truckin’” before Metallica tempers the pace with the mellow “When a Blind Man Cries” to end the record, but it’s the trio of Purple album Glenn Hughes, Steve Vai & Red Hot Chili Peppers’ Chad Smith’s take on “Highway Star” that steals the show. Tribute albums are always a mixed bag, and while Re-Machined: A Tribute to Deep Purple's Machine Head doesn’t offer much in the way of diversity, yes, aside from the Flaming Lips, it’s still better than most.