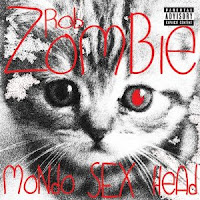 Think of Mondo Sex Head this way, if you’re Rob Zombie, why not release a second remix album? His first such attempt, 1999’s American Made Music to Strip By, went Platinum (and Gold in Canada). While American Made Music to Strip By was a remix album of Hellbilly Deluxe all itself, Mondo Sex Head delves into Zombie’s entire sonic canon.  Mondo Sex Head features a smattering of today’s top producers taking a stab at many of Zombie’s best known tracks from throughout his career, beginning with “Thunder Kiss ‘65” as envisioned by JDevil, or Korn frontman Jonathan Davis for those who might not know, who cuts and chops the recognizable track to add a marching elements. Deftones' Chino Moreno and Far's Shaun Lopez (under their Crosses moniker) also stop by and get their hands dirty on “Dragula,” adding a Crosses makeover by giving the classic monster movie inspired track a dreamy, atmospheric backdrop. Perhaps the strongest attribute of Mondo Sex Head is the fact that Zombie himself seemingly knows who to pair with what song, as evidenced clearly by the use British DJ Photek on the track “Living Dead Girl” and the criminally unknown Kraddy on “Superbeast.” There are no out and out butcher jobs on Mondo Sex Head as each remixer does justice to the original, treating these songs with kid gloves as it were, careful not to sully their rep. Mondo Sex Head is what it is – a remix album – and its probably about as good as you’d expect and as good as it can be for what it is.