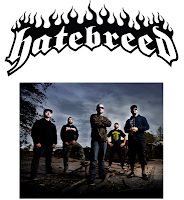 Razor and Tie announces the addition of Hatebreed to its North American label roster.

The band has completed work on its forthcoming new studio album which will be released in January, 2013 on Razor & Tie in North America/Canada and on Nuclear Blast in Europe and various additional international territories. The new album will be the band’s 6th official album to date, and the follow up to Hatebreed’s self-titled album and also their covers album, For The Lions (both released in 2009).

Hatebreed lead vocalist Jamey Jasta comments, “We're really excited to be working with such great people at both Razor and Tie and Nuclear Blast. We've made an awesome album and we're chomping at the bit to get it out and hit the road. Global domination begins now."

In a joint statement, Pete Giberga VP of A and R and John Franck SVP of Marketing for Razor and Tie comment, "Hatebreed's anthems coupled with their do-or-die work ethic continues to make them a dominant force in hardcore and metal today. Their inclusionary message and deep relationship with their fan-base also makes them a band that is built for these times. With the group playing some of the best shows of its career, their renewed sense of purpose has never sounded more steadfast and resolute than it does on this forthcoming new record."

The forthcoming new album was co-produced by Hatebreed, Zeuss (Suicide Silence, All That Remains, Shadows Fall) and Josh Wilbur (Lamb of God, Avenged Sevenfold). Wilbur also handled mixing duties on the new record.The new studio album will be supported by extensive global touring that will stretch well into 2014.

To date, Hatebreed has sold a combined 1.1 million albums in North America. Hatebreed is Jamey Jasta (Vocals), Chris Beattie (Bass), Wayne Lozinak (Guitar), Frank Novinec (Guitar) and Matthew Byrne (Drums). The band is managed by Steve Ross for No Name Worldwide and represented for U.S. touring by Tim Borror at The Agency Group.