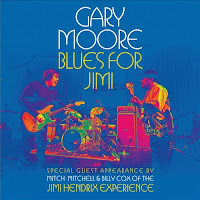 Gary Moore’s Blues For Jimi finds the late Moore paying the ultimate tribute to another late guitar virtuoso, Jimi Hendrix, by performing, in impressive fashion mind you, a steady dose of work from Hendrix’s replete catalog. Recorded in late 2007 at the London Hippodrome, Blues For Jimi features Moore abusing an arsenal of guitars with such Hendrix staples as “Purple Haze,” “Foxy Lady,” and “Fire” during the near 80-minute set, and is even joined by a duo of Jimi Hendrix Experience alums, Mitch Mitchell and Billy Cox, for a trio of songs (“Red House,” “Stone Free,” “Hey Joe”) towards the end of the set. A sheer highlight of Blues For Jimi is the blues opus “Red House,” though it is closely rivaled by “My Angel,” a guitar driven instrumental lead in to “Angel,” as well as the 10-minute-plus closer, “Voodoo Child,” another of the afore mentioned Hendrix staples. Blues For Jimi is a treat to say the absolutely least, a record that will appease and excite the hardest of the hardcore Hendrix fanatics and casual Hendrix admirers at the same time.