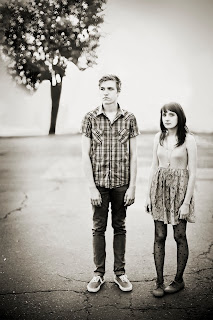 Say Anything frontman Max Bemis has announced that Tyler, TX based duo Merriment is the newest addition to the roster of Rory Records, his imprint label via Equal Vision Records. Merriment is the second band signed to Rory Records, which was launched earlier this year with the signing of Tampa, FL-based indie outfit Tallhart.

The two piece band is comprised of siblings Christie DuPree (vocals, guitar) and Collin DuPree (guitar) and has already shared stages with the likes of Mutemath, Eisley, Say Anything and more.

"We're super excited to be signed to Rory Records," Christie expresses. "Everyone we've met at EVR and Rory has been so nice to us and we are so excited to be working with them! Collin and I are writing for a new record right now and we can't wait to get into the studio and to be able to share these new songs with everyone. We also have a few dates with Say Anything coming up which should be a lot of fun!" Bemis adds of the signing, "Not only is Merriment one of my favorite bands but they have more potential to blow the heck up than most bands I encounter nowadays."

The young duo's debut album, Through The Rough, was recorded in their hometown of Tyler, TX, with the assistance of Andy Freeman for the recording, engineering and mixing. The duo self-released the EP on March 6, 2012 and later released a vinyl split 7” with Eisley, featuring the EP’s title track, on July 3, 2012. This summer Merriment premiered their first music video "Blessed Soul" exclusively through Paste Magazine. The video, directed by Chris Phelps, is also now available on Youtube.

The true beauty of Merriment's Through The Rough lies within its seemingly simple, yet subtly intricate compositions. While on the surface each track carries the sound of delicate sweetness, further listens reveal a mesmerizing darkness within the lyrics, fueled by the pure pain of love lost. Musically the album is airy and whimsical with light, dancing guitarwork and gentle percussions guiding along the angelic, emotional vocal work of Christie. Their memorable tunes blend together elements of indie, folk-Americana and pop music - reminiscent of the innovative likes of Iron and Wine, Red House Painters, and Bon Iver, offering a graceful, modern sound that displays a musical maturity well beyond their years.
Email Post
Labels: merriment rory records signing