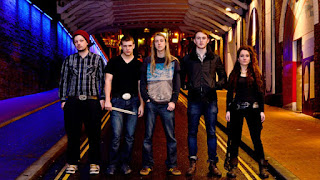 InsideOut Music are proud to announce the signing of rising young prog-upstarts Maschine to their worldwide roster. The UK band was awarded Best New Band by both Prog Magazine and the Classic Rock Society in 2011, and features guitarist/vocalist Luke Machin and bass player Dan Mashal of The Tangent.

"Since I can remember I've always played the guitar and composed music. To have the amazing credibility that comes with IO to assist our music is extremely exciting," says band leader Luke Machin. "The inspiration that I've taken from many artists over the years, a lot of whom are with IO, I'm certain this album will have something for everyone."

"The thing that really excites me about signing to IO is that the label is interested in our music and our band," adds drummer Doug Hamer. "The vote of confidence is invaluable. We will work tirelessly to bring the vision of Maschine that we and IO share into reality."

Says InsideOut label head Thomas Waber, "Luke and his band are a really young and talented bunch. We are looking forward to working with them on their debut album!"

Look for Maschine's debut album next year on InsideOut Music.