When the then 21-year old Mac DeMarco released his debut Rock and Roll Night Club 12" just a short while ago in the Spring of 2012, it was accompanied by a barrage of bizarrely funny promo videos, wildly unhinged live performances and a not-so-subtle disparate range of promo photos.

MP3: "My Kind of Woman" - http://soundcloud.com/capturedtracks/mac-demarco-my-kind-of-woman

The Inner Mansions is the second full length record from Teen Daze, and also his second of 2012. The album is a collection of songs that were written between the months of May and June 2012, and they are his most introspective and moving to date. This is an album of spiritual and musical journey, and features some of Teen Daze's most captivating songs. 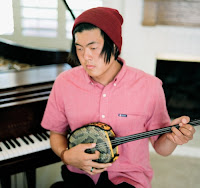 After releasing his first single, "Coral," and getting remixed by Teen Daze, GRMLN covers Ben E. King's "Stand By Me". Yoodoo shares a bit about the cover - "This was a song that I always used to scream in the shower, and I thought that it would be a fun song to cover."

Feeding People was founded and is headed by nineteen-year-old Jessie Jones, who channels the raw power of Jefferson Airplane's Grace Slick and Janis Joplin at her most primal as she leads with strong, almost vicious vocals, bellowing blasphemies as if possessed by spirits with a masked sweetness reminiscent of Billie Holiday.