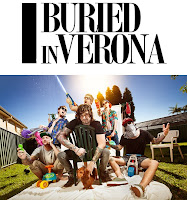 Buried In Verona is the latest addition to join the Artery Recordings, the joint venture between The Artery Foundation and Razor and Tie. The Australian based band will release their third studio album Notorious on October 16th. Notorious was recorded and produced by Fredrik Nordström (Soilwork, In Flames, Opeth, Bring Me The Horizon) at his Studio Fredman in Gothenburg, Sweden.

“I'm extremely excited about the addition of Buried in Verona to Artery Recordings,” comments Eric Rushing, CEO of The Artery Foundation. “I was instantly hooked on the bands record and feel it's a breath of fresh air that the music scene desperately needs! People are going to love this band worldwide!”

“We are happy to announce that we are now signed to Artery Recordings in the USA,” adds Brett Anderson vocalist of Buried in Verona. “It’s been a long time goal for us to be signed and released in America and we are all extremely excited to be working with such a great company and alongside such bands as Attila, Chelsea Grin, For The Fallen Dreams and many more. Looking forward to getting over there and showing the states what BIV can do.”

Buried In Verona found success in their home country this past year after signing to Australia's premier heavy music company, UNFD. UNFD and The Artery Foundation also work together on Management duties for the bands The Amity Affliction and Dream On Dreamer. "The Artery Foundation was the first company from North America that we worked with, and to this day it's been a pleasure every step of the way. Buried In Verona will be no exception. An incredible band on a fantastic label is bound for success, and we're excited that the U.S .can see the talent we have down under once again," comments Luke Logemann of UNFD.