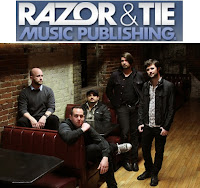 Taking Back Sunday has signed a publishing deal with Razor & Tie Music Publishing.

Taking Back Sunday is celebrating their ten year anniversary and just wrapped headlining the main stage of the 2012 Van’s Warped Tour. The band spent a lot of this year on a headline tour of South America, Australia, Europe and South East Asia. They also performed at various U.S. Military Bases in Europe. Taking Back Sunday recently announced a 10-year anniversary tour to celebrate their first release, the acclaimed Tell All Your Friends. The two-month full US tour, which will feature special guests Bayside as main support and a variety of openers along the way (tour dates available here http://www.takingbacksunday.com).

With one platinum and two gold albums in their five album repertoire, Taking Back Sunday has been fortunate enough to tour the world with some of the biggest names in rock music including Linkin Park, Blink-182, Faith No More and Green Day to name a few. They have also performed on the main stage of some of the world’s biggest festivals including Reading and Leeds (UK), Soundwave (Australia), Summer Sonic (Japan), Bamboozle (US) and 2007’s global Live Earth where they shared the Giants Stadium, New Jersey stage with Bon Jovi and The Police. Over their lengthy career, Taking Back Sunday have also been active in soundtrack placements in film and TV with ties to films such as Spiderman, Transformers and Fantastic Four; TV placements including Friday Night Lights, Degrassi, etc; video game tracks for Tony Hawk, Madden and more, and strategic partnerships with companies like Verizon and ESPN. They have had multiple top 5 Billboard Soundscan debuts, Top 10 alternative radio hits, received rave reviews in major publications from Rolling Stone to Spin to People and have been lucky enough to perform on a few late night talk shows including The Tonight Show with Jay Leno, Jimmy Kimmel Live, Late Show with David Letterman and on Late Night with Conan O’Brien.