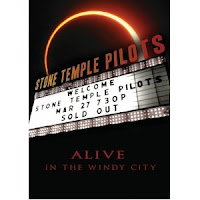 Stone Temple Pilots, live for over an hour and a half, and there’s nothing wrong with that statement, an apt description of the Pilots’ recently released Alive in the Windy City concert DVD. In terms of this rather impressive setlist, it’s the bands newer material, songs culled from their 2010 eponymous album, which really pales in comparison (“Hickory Dichotomy,” “Huckleberry Crumble”) to the endless parade of hits the band rolls out (“Sour Girl,” “Creep,” “Plush”). And that’s not even to mention the blockbuster trifecta of “Vasoline,” “Crackerman,” and   Wicked Garden” which really gets Alive in the Windy City kicked off on the right foot. Continuing on, Alive in the Windy City delivers again and again, brilliantly it should be added, in the form of timeless cuts like “Sex Type Thing” and “Dead and Bloated” before the sometimes underappreciated “Trippin’ On a Hole in a Paper Heart” rounds things out in style. There’s an interview with the band included as a bonus, but honestly, when you glance at the setlist here, the interview is just secondary. If you’ve read this far, it should be no small secret that Alive in the Windy City is a must-own.