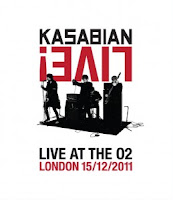 On Live at the O2: London 15/12/2011, Kasabian’s first stand alone DVD release, the band does not disappoint, as its clear from the get-go here that a Kasabian show is more an experience than a concert. Filmed in front of a raucous, sold out O2 Arena, 10 days prior to Christmas while touring for their tremendous Velociraptor! album (check that record out if you haven’t already), Kasabian dazzles with songs like “Shoot the Runner,” “Vlad the Impaler” and “Fire,” though it’s the track “Clubfoot” that really steals the show here. But, it’s not just the music. With Live at the O2: London 15/12/2011, it’s the experience as well, as the camerawork here is dynamic and the shots vibrant while the sound is nothing short of brilliant. Hell, the band even brought along a full string section for the show. You’ll also get a bonus feature - I Hear Voices, a 30-minute documentary following the band on tour in 2011. Live at the O2: London 15/12/2011 is an excellent representation of what Kasabian brings to stages around the world, and so good in fact that you’ll want to make sure you’re the first in line for tickets the next time they pass through your town.