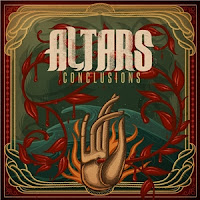 Altars’ Conclusions is a record riddled with pratfalls, though some of these songs do offer up something of a redeeming quality. But still, those album pitfalls persist, like the majority of these songs blending together, sounding the same and coming off as nothing more than boring, and while early entries such as “Red Brick Army” and “Scum” lead the charge early on in Conclusions, those pratfalls quickly catch up and cause the record to slow and ultimately fade down the stretch. This album is full of what you’d expect from a band of this ilk – breakdowns, bass drops, callouts, gang vocals, etc, etc, and when it works, it sounds pretty damn good (“Unknowing”), though that’s clearly not always the case and the endless use of this sonic mix just eventually tires. At track six, “Unknowing” is the apex of Conclusions, which speaks to the record as a whole. Conclusions is heavy and fast, and if that’s all you’re looking for, then by all means, pop this album in and dig in, but if you’re looking for a little substance to go along with your breakdowns, you’re barking up the wrong tree. To be honest, Conclusions isn’t a terrible release, it just feels too long as a dozen songs in length. If this record were to be say, five, possibly six, songs long, it would be far superior. In the end, Conclusions sounds like a release from any other band on the Facedown roster – it lacks identity.