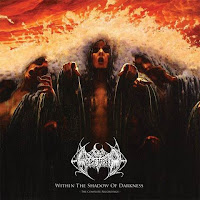 Gorement, one of the finest yet obscurest death metal bands to ever emerge from the soil of Sweden, has signed a worldwide deal with Century Media Records for the release of the band's entire recordings.

Within The Shadow Of Darkness - The Complete Recordings will be available exclusively at CM Distro as a 2CD and double vinyl (incl. the 2CD) in late September. Other than Gorement's discography compilation Darkness Of The Dead (released in 2004), the entire musical content included on the upcoming release has been carefully remastered from the original master tapes by Dan Swanö, who has already been in charge of the production of Gorement's demos and the Into Shadows EP. The result is mind-blowing: All songs sound fresh and incredibly massive without ever losing their original character. Dan Swanö comments:

"Gorement was one of the first bands outside my 'circle' that I ever recorded. The first demo was done on a 4 track portastudio, and I must say I am a bit surprised that the sound on that one is the coolest after the restoration!! Gorement could have been so much bigger if they had recorded the 1st album in a studio that would have given them the fat and 'gory' sound their music deserves. The songs are catchy and the musicianship high above average in the SweDeath scene at the time. It was a pure pleasure to revisit these recordings and carve out the best sonics possible."

Within The Shadow Of Darkness - The Complete Recordings is meant for all those true fans who either missed the chance to get a copy of the super rare album, demos or EP of the band-- or who don't have the money to pay a fortune for them at online auctions. It will also be released to stop the material from being bootlegged. This album is the one and only official release of Gorement to date.
Email Post
Labels: century media gorement signing