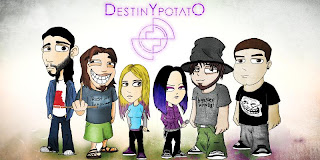 Century Media is happy to announce the signing of the Serbian-based band, Destiny Potato.

"Just a few months after we officially formed the band we got an opportunity to play our first show at Euroblast 2011 where we met some boys and gals from Century Media as they came to hear/see us play. Not long after the fest we got in touch with them and after months of negotiations we are finally here and really looking forward to an amazing collaboration with all the great people in and around this label." -- Destiny Potato.

Officially formed in the spring of 2011, Destiny Potato mastermind, David Maxim Micic and singer Aleksandra Djelmas had been writing and recording songs together since they were 16. Maxim and Djelmas attended the same high school and both their fathers played in one of Serbia's most popular progressive rock bands, Yu Grupa.

"I officially met Alex in a music class," says Maxim. "We knew our father's played together so we first started talking about that, then we realized we both loved pop music and would get together after school and write lots of piano based tunes with dreams of one day having a number one song on the pop charts."

Following high school, Maxim attended the prestigious Berklee College of Music. It was there a friend introduced him to some heavier sounds, namely the UK based tech metal band, Sikth.

"From there I just started discovering so much more metal music. I decided to do a solo album inspired by these bands as well as Serbian and other Eastern European music (Maxim has self released 2 solo albums thus far, the Bilo series, volumes 1.0 and 2.0) though some of the heavier sounds also started to be incorporated into the music Alex and I were working on."

Maxim and Djelmas worked with a few other people during this time and began uploading songs and clips online. When deciding on band name, they wanted to come up with something light-hearted to fit their personalities, yet something that everyone would remember. Destiny Potato was chosen.

"I really have no idea what it means or where it actually came from," comments Maxim.

When the organizers of the annual Euroblast Festival reached out to Maxim about playing the 2011 edition of the fest, they originally wanted him to perform solo, but he convinced them to add DESTINY POTATO instead. What he didn't tell them was there was no actual band. When the organizers agreed to add them, Maxim and Djelmas assembled one, featuring a popular Serbian singer Ana Maglica as a second vocalist and drummer Milan Yeqy, and performed their first ever show in front of a sold out crowd. In attendance were representatives of Century Media Records, who spoke to the band and later signed them to a worldwide deal.

"I guess not much has changed with Alex and I over the years," says Maxim. "We are still best friends and I guess would still love to have a song on top of the charts, maybe not the pop charts, though. Do they have a metal/pop chart? If so, that would be our great. I want to hear that famous American DJ say 'you've just heard Destiny Potato, now onto our long distance dedication...haha'"