Seether Do What They Do on the Waterfront (Sort Of) 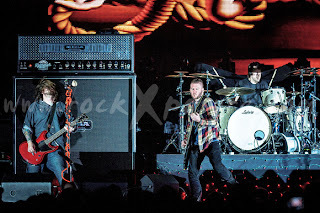 Seether wasn’t great last night, and if you were one of the many people there in attendance, chances are you agree with me. Well, if this wasn’t the first time you’d seen the band live that is. So, OK, if this was your first time seeing Seether, then they probably kicked ass in your mind but coming from someone who has seen the band half a dozen times live, this was a fairly lackluster show to be honest. Sure, the setlist wasn’t all that terrible but the severe lack of new material was disheartening, as only a few songs were performed off their tremendous Holding Onto Strings Better Left to Fray record (“Tonight,” “Country Song”). It is, however, really hard to complain about the bountiful amount of old material (“Gasoline,” “Needles,” “Fine Again,” “Broken,” “Driven Under”), which came early and often, but the severe lack of crowd interaction and the feeling that the band was simply going through the motions kind of killed that nostalgic vibe. And that’s not even to mention the band’s predictable ending, closing their set with “Fake It,” before ‘encoring’ (sort of) with “Remedy.” The band didn’t color outside the numbers at all here. A cover (or two) would have been nice, and not even a surprise one was necessary (even though the band does insanely good Nirvana covers), “Careless Whisper” would have killed. Alas, we got what we got, and I guess it’s hard to expect much from a free show.
Email Post
Labels: concert reviews live reviews seether