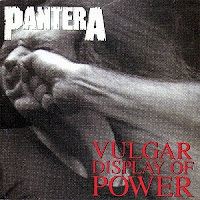 To be honest, what the hell can you say about Pantera’s seminal release Vulgar Display of Power. It was one of the most recognizable, memorable and most influential metal releases of the 1990’s, which might just be the most shocking thing about this album – it was released 20 years ago. Sorry if that makes you feel old, but that factoid speaks to these songs’ ability to stand the test of time more than anything else. Led by a number of songs you’ve heard time and time again (“Walk,” “Fucking Hostile,” “This Love”), songs that really don’t need any introductions or deep analysis, Vulgar Display of Power finds Pantera at the absolute top of their game, and what better way to remember this album than the 20th Anniversary Edition, released by the fine folks over at Rhino Records. From frontman Phil Anselmo’s bombastic bark and growl and drummer Vinnie Paul’s thunderous percussions to gone but not ever forgotten guitarist Dimebag Darrell’s punishing riffing, this newly released edition gives you all of those unforgettable songs, and tosses in a live DVD and a collection of music videos. The DVD, Live in Italy, is a literal time capsule and plays host to five tracks, four culled from Vulgar – “Mouth For War,” “Hollow,” “Rise,” and “This Love.” And if that wasn’t enough to entice you to add this release to your collection, then the trio of music videos – “Mouth For War,” “Walk” and “This Love,” should do the trick. But, above all else, the crowning jewel of the 20th Anniversary Edition is the never before release bonus track “Piss.” Yes, you read that right – Pantera – never before released. So yes, the answer is simple, you need to own this.