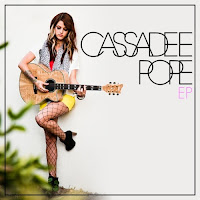 With Hey Monday in her rearview, Cassadee Pope is now stepping into the spotlight with her debut solo EP, the most cleverly titled Cassadee Pope. This self-titled debut is a sensational showcase for her sunny tones and accessibly clean approach, one that’s easy to get onboard with. You won’t invest much time here (4 songs under 15 minutes) and when you hit play you’ll find four shimmering tracks sure to become your new summer anthems, tunes ready to fill the air as you hit the open road with the windows down. Pope emulates Taylor Swift time and time again (“Secondhand,” “I Guess We’re Cool”), channeling the teenage crossover sensation throughout, though it’s the albums bookends that steal the show. “Original Love” is a highlight, a track that displays Pope’s innate penchant for the saccharine, thanks to undeniably infectious hooks. But don’t sleep on the EP’s closer “Told You So,” a piano-led ballad that shows Pope’s vulnerable side. One thing is for sure, Pope is probably going to need a sturdy pair of sunglasses, because after this EP, her future is looking so bright it’s near blinding.