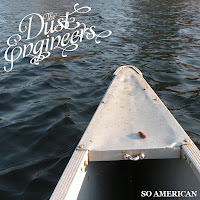 The Dust Engineers are back at it to create fireworks with their cover of the 1978 track “So American.” Originally performed by The Mutants and then again by Dodge Dart, The Dust Engineers have put a nice twist on the song, with singers Zac Meyer’s and Sara Maeder’s voices dancing around each other playfully in the piece, creating a stellar cover.

“The Dust Engineers' version of "So American" was about eleven years in the making. Ironically, I first heard "So American" while living in Israel. At fifteen years old I popped my first skateboarding video, Black Label's "Label Kills," into the VCR. The soundtrack was packed with great bands like The Clash and Cheap Trick, but the song accompanying Jeff Grosso's skating stood out from the rest. As the closing credits rolled down the screen I stuck my head right up to the TV to get the name and artist of the song. I went to my computer and typed "So American" into Napster. Nothing came up. These were the very early days of the internet and Dodge Dart was not available at my local record store so I could really only listen to the song while watching the video.