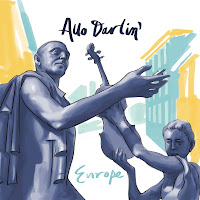 The second single from Allo Darlin's superb second album is none other than the title track, "Europe." The London-based four-piece - led by Australian songbird Elizabeth Morris, with guitarist Paul Rains, Bill Botting on the bass and Michael Collins on drums - create perfect, sophisticated pop gems and know how to put on a joyous, effervescent, fun-filled live show.

Gloriously catchy, brilliantly uplifting and charmingly intelligent, "Europe" is one of the most exciting albums of the year, with Allo Darlin' pleasing their existing loyal fanbase as well as winning over hoards of new admirers. The album is continued proof that Allo Darlin' are one of THE bands to watch out for in 2012.