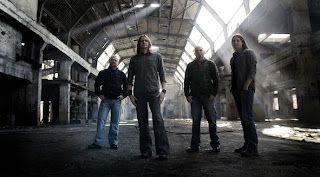 Poland's Progressive Rock stars Riverside have signed a new worldwide deal with InsideOut Music, and the band is currently working on a new studio album for release in early 2013. The upcoming album is the much-anticipated full-length follow-up to 2009's Anno Domini High Definition, which entered the charts at No. 1 in Poland and attained Gold status in the band's home country.

Riverside has this to say about the new deal: "We're very pleased that we'll keep collaborating with InsideOut/Century Media. We've overcome many difficulties together and we hope that the new contract, signed at the moment when we start another decade as a band, will help us to grow more, and will make us able to reach a larger number of listeners with our music. The new album is on the way. I believe it will be a new beginning for Riverside."

Thomas Waber, founder and label manager of InsideOut Music, adds: "Riverside is one of the most important bands on InsideOutMusic and in the current Progressive Rock scene. Therefore I am extremely pleased to be able to renew and continue the relationship with our friends from Poland!"

You can follow the band's recording process of the new album by visiting their online blog here: http://www.riversideband.pl/en/news/studioreport

A in the studio video interview with the band directly can be seen here: http://www.youtube.com/watch?v=9105B_gCrF0