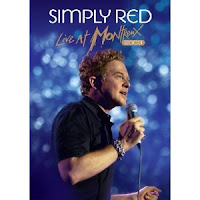 If Simply Red’s Live at Montreux 2003 proves anything, its proves that frontman Mick Hucknall has not lost a step – hell, if possible, he has gotten better throughout the years. Case in point is the concerts brightest moment, “Holding Back the Tears,” which features Hucknall flying solo with an acoustic guitar in a captivating moment that shines as a microcosm of Live at Montreux 2003 as a whole. Sure, by 2003 Hucknall is the surviving original member of Simply Red but that in no way diminishes this concert – who honestly is more important than the lead singer anyway? Filmed during the bands tour in support of 2003’s Home (six of the albums 11 tracks are included in this set), Live at Montreux 2003 also features Simply Red trying their hand the Stylistic’s “You Make Me Feel Brand New,” a cover tune that registers as one of the DVD’s strongest tracks. Armed with bonus features including the bands set from the 2010 Montreux, Live at Montreux 2003 is a DVD that really shouldn’t be missed. And speaking of not to be missed, make sure you check out Simply Red’s cover of Harold Melvin & The Blue Notes hit, “If You Don't Know Me By Now,” which closes out the bonus concert. Consider it the cherry on top of an already rich and delicious sundae.  Simply Red were once considered tastemakers back in the 1980’s, and Live at Montreux 2003 shows that, if today’s sonic climate was a tad different, that the band might has what it takes to continue pumping out the hits today.