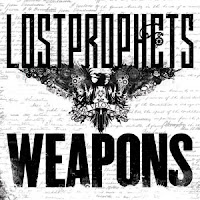 For the most part Weapons is a record you’d expect from Lostprophets; not exactly safe, but more familiar if anything. By this point in their career, 15 years and five albums, it’s clear this band is very comfortable in their own skin, and are adept at playing to their strengths like putting to wax, a record in Weapons comprised of a heaping helping of pristine radio ready rock tunes brimming with huge choruses and anthemic vocals that make it near impossible to not sing-a-long, cuts here served up in spades (“Another Shot,” “Jesus Walks,” “A Little Reminder That I’ll Never Forget”). Weapons is all killer, no filler (thanks Sum 41), well very little filler, a record that doesn’t really slow from the glossy, hard-hitting opening tandem of “Bring Em’ Down” and “We Bring An Arsenal,” a pair of potential impact hits that set the table for what is to come deeper into Weapons, an album that features no shortage of potential singles (“A Song From Where I’m From,” “Better Off Dead”), the former of which sounds like the next “Rooftops.” Weapons sounds more akin to Start Something than Liberation Transmission and if you’re of the group that wrote this band off thanks in large part to a lackluster album in the form of the Betrayed it’s about time to get back on the bandwagon because Weapons proves Lostprophets is back and better than ever. Hurry up though, cause there’s only so much room on the bandwagon.