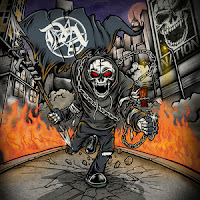 Ok, this might sound a bit off, but with their latest Nation, Dr. Acula has matured a bit. While the fun-loving band is still the same group of guys you’d like to invite to your next kegger, it seems they are starting to put the pieces together and with Nation appears they’re ready to take that next step in their own evolution. And honestly, with a track titled “Robot People From Hell,” you know these dudes haven’t lost an ounce of their sense of humor. That being said, Nation is a nice progression for the party rockers (eff off LMFAO), one that sees the band honing their skills and delving deeper into their craft, producing tomes like the dizzying six-minute, Protest the Hero meets the Human Abstract meets Arch Enemy shred-fest “Keep On Running in Place,” and the layered intensity of “Thinner.” With the distracting filler aka hip-hop interludes all but gone, Nation finds the band headed down a straight and narrow path, and the band is probably better off for it in the long run.