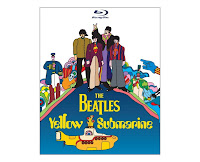 It’s wonderful, it’s colorful, it’s fantastical, it’s the Beatles classic trip-fest Yellow Submarine, reissued after long being out of print. The film was digitally restored and cleaned frame by frame by hand since it was felt an automated attempt at restoration could not address the nuances of the multidisciplinary animation style. Yellow Submarine is a visual feast, a treat really, that’s both nonsensical and light-hearted at times and intelligent and thought-provoking at others, a distinct, unforgettable experience that has long been a piece of pop culture history.

The story follows the Fab Four, obviously, and their adventures in the ever effervescent Pepperland. While Sgt. Pepper’s Lonely Heart Club Band is busy spreading their message of peace, love and happiness, the Blue Meanies, the antithesis of Pepperland, are busy plotting an attack on Pepperland in hopes of turning it into a colorless place with their blue freeze-bombs. Only Old Fred manages to escape in the Yellow Submarine to search for help. He approaches Ringo for help and the two set out to find Ringo’s lads, Paul, John and George. Together Old Fred and the Beatles travel to Pepperland to free it of the Blue Meanies.

Yellow Submarine has a bountiful amount of extras, starting with full length audio commentary by animator John Coates and designer Heinz Edelmann. There’s also a documentary, “Mod Odyssey,” which is chock full of all sorts of Beatles factoids. You’ll also get a gallery of pencil drawings and still photographs, as well as interviews, a booklet with production notes and, the true highlight, a film’s score on a separate track.

Yellow Submarine is an experience for both the old and the young, making it literally fun for all ages. It’s a veritable cornucopia of colors, a vibrant palate explosion that has long held up, and withstood the daunting test of time.