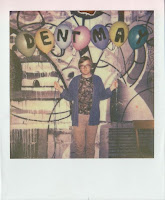 Recent singles on Forest Family and Paw Tracks have found Dent abandoning the ukulele in favor of cosmic synths, funky guitars, analog drum machines, loopy bass lines, and massive vocal harmonies. He played all the instruments on his new album Do Things, which was recorded at the Dude Ranch and in a friend's rural cabin by a cotton field. Do Things was released by Paw Tracks on June 12, 2012.