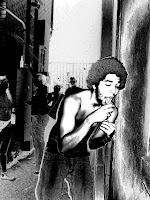 Houston’s own king of genre-bending noise, Michael LaCour AKA Blackie is fresh off a 15 city international tour of France and the Netherlands, three blistering shows at Toronto’s legendary NXNE and one massive performance in Montreal (where he was welcomed with open arms after his two raucous shows at Pop Montreal 2011). The New York Times rightfully picked him as one of five Texas artists to watch for at SXSW 2011 and now he’s set to officially release GEN, his first acoustic collection of recordings on Tooth Records.

Blackie’s sound defies description but holds true to his personal mantra: TOTAL FREEDOM. Indeed, Blackie is all about making no-holds-barred music that melds sounds reminiscent of bands as diverse as Butthole Surfers, Geto Boys, Limb, Dalek, and Black Flag into one cacophonous maelstrom of beautiful discord. His three previous releases, Wilderness of North America (2008), Spred Love (2009) and True Spirit & Not Giving a F*** (2011) were perfect examples of a man wholly unwilling to compromise his artistic vision.

And 2012’s GEN promises to be just as impressive as his past releases. He’s already getting love from sites like HangoutAltSounds and we’ve got a sneaking suspicion Blackie is going to be busting your speakers (and eardrums) all summer long. After hearing GEN, TOTAL FREEDOM might just be your new personal mantra.
Email Post
Labels: blackie free music free music weekend