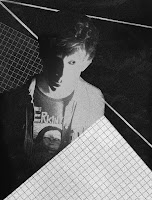 After a pair of lauded releases in 2010's self-titled LP and 2011's Total Decay EP, The Soft Moon are proud to announce their forthcoming second LP, Zeros, due this fall for the ever-reliable Captured Tracks.

Additionally, The Soft Moon recently released a new song via Twitter that was created in collaboration with legendary electronic musician John Foxx and his new band The Maths. The track "Evidence" was born naturally out of the two artists' mutual appreciation for one another. Speaking with Artrocker last year, Luis had this to say of John Foxx's influence on his own music,"Foxx's Metamatic album is what led me to discover the Arp Odyssey, the most crucial instrument in my collection, and the key synthesizer used in creating my unique sound. So, that album is very important to me and what I do." With regard to the collaboration, John Foxx said, "The Soft Moon are where minimalism maximizes into a new universe of possibilities. It's an absolute joy for us to work with them.'' This momentous collaboration will be memorialized with a one-sided 7" featuring "Evidence" due June 26th from Captured Tracks.