Free Music Humpday! The Swayback - "What Death Cares About" 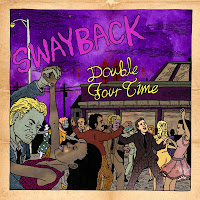 The Swayback have announced the official release of their new full-length “Double Four Time,” due to come out on July 10th via LGL Records. The album is named after a fictional dive bar where the jukebox plays an eclectic mix covering the full rock & roll spectrum. Double Four Time perfectly captures The Swayback’s range of bluesy punk swagger, dark Brit-goth atmosphere and hauntingly beautiful vocal tones. The kick-off track off of the album, “"What Death Cares About,”" can be streamed below.

STREAM: "What Death Cares About" - http://theswayback.bandcamp.com/track/what-death-cares-about

To capture their vision for the album, the band worked with two very different producers. Andy Johns, known for previously producing a striking number of THE landmark rock albums of the 20th century (Led Zeppelin, The Rolling Stones, Television), worked with the band in Los Angeles. Jason Livermore, who has had a hand in some of the definitive punk albums of the last decade (Rise Against, The Gaslight Anthem, Hot Water Music), tackled tracks at Bill Stevenson’s (Black Flag) legendary Blasting Room Studios in Colorado.