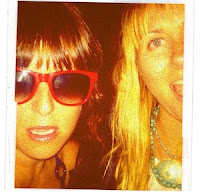 LA's Hot As Sun has signed with Last Gang Records, its first single for the label, "Come Come" is out today, with a remix by Tokyo Police Club on the B-side. A new EP is also due on June 19 and the band is currently in the studio working on its debut full-length which will be released this Fall.

Hot As Sun is an artist collaboration formed by Jamie Jackson (singer/musician) and Deborah Stoll (lyricist/visual artist). It has since expanded to a full band. After bonding over a soundbath at the integration in Joshua Tree, Jackson and Stoll soon found they shared a love of weird sounds, magic houses, Pegasus and bacon. Jamie wrote all of their songs on the omnichord and spent the summer recording the music in her loft in downtown LA with musician WAZ. Soon after music videos and live show projections were created in Deborah's house in Silverlake.