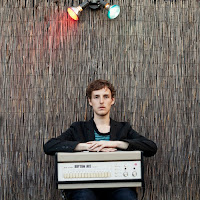 Jonti may not be a familiar name just yet but that's no reflection of his resume. Multi-instrumentalist, arranger, producer, and vocalist, Jonti, began assembling music after his departure from South Africa to Australia in 1999. Spending countless hours studying records like they were books, processing each song, this became Jonti's music school, testing his theories on a 4-track recorder.

Twirligig draws inspiration from many of Jonti's favorite artists, Madlib, Stereolab, Free Design and The Beach Boys. But Twirligig's main inspiration came from cartoonist/ filmmaker Norman Mclaren. Jonti explains, "His films are complex, but they're still fun. You can feel his enthusiasm for techniques and experimentation. I try make simple pop songs with that same mentality."