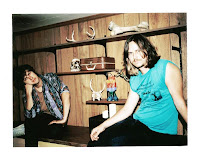 Warner Bros. Records is pleased to announce that it has signed Jake and Jamin Orrall, aka JEFF The Brotherhood, to its roster. Seen by many to be latter-day pioneers of the Nashville rock scene, the duo is known for its rockin' live shows, prolific recorded output, relentless work and touring schedule, as well as its family-owned, super cool, vinyl-centered record label, Infinity Cat Recordings, which has been a pillar of support for Nashville bands since 2002 with over 70 releases to date. Infinity Cat Recordings was named "Nashville's Best Record Label 2010" by the Nashville Scene.

JEFF The Brotherhood's first release for Warner Bros. Records is the upcoming Hypnotic Knights EP, which will be available digitally on May 22nd. All four songs are taken from the band's upcoming album Hypnotic Nights, which was co-produced by Dan Auerbach and JEFF The Brotherhood and recorded at Auerbach's Easy Eye Sound Studio in Nashville. Hypnotic Nights will be released by Warner Bros. Records on July 17th.

JEFF The Brotherhood have built a reputation for stripping rock music down to its melodic rock basics and delivering manic live shows with Jamin's three drums and three cymbals and Jake's three-string guitar and ferocious vocals. The band's work ethic defines D.I.Y., from their simple but compelling videos to their self-produced and critically acclaimed albums (including 2011's We Are The Champions), EPs and singles. They have released five split singles with other artists, including "Bummer" with Best Coast.

JEFF The Brotherhood has clocked in more than 230 shows in the past year and received critical acclaim for We Are The Champions, which was recorded by Roger Moutenot (Yo La Tengo, Sleater Kinney, Velvet Underground). The self-produced album took the band's sound, which has been described as psychedelic, classic rock, kraut-punk, garage pop, monster metal, scrungy, filthy, fizzy and fresh.
Email Post
Labels: Jeff the Brotherhood signing warner brothers records