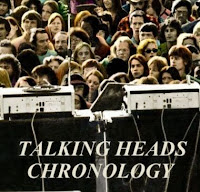 Talking Heads Chronology is just that – a chronological history of the band told mostly through live performances, though there’s a fair amount of backstage footage, fanspeak and interviews throughout this DVD’s proceedings and bonus footage, but for the most part it’s all about the performances, which isn’t a bad thing. Kick back all the way to 1975 and New York City’s legendary venue CBGB’s, and Talking Heads can be seen ripping off a trio of classics from the bands timeless canon – “With Our Love,” “I’m Not In Love” and “Psycho Killer,” and while the footage may be in black and white, it’s a sight to see none the less. From there, as the years progress, Chronology takes the band around the world, from England to New York to California, playing songs like “Don't Worry About the Government,” “Thank You for Sending Me an Angel,” and "Warning Sign,” though it the bands stints on ‘Saturday Night Live’ (“Artists Only”) and ‘American Bandstand’ (“Take Me to the River”), that truly steal the show. Concluding, obviously enough, with the bands performance at their Rock and Roll Hall of Fame induction ceremony, Talking Heads: Chronology is a must-see for fans of the band and anyone wishing to get a better glimpse into the various stages of the band throughout their storied history.