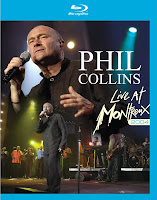 In case you’ve forgotten, Phil Collins Live at Montreux 2004 will remind you of two things – first, that Collins is an exceptional drummer, something he wastes no time showcasing from the outset of the DVD, and second, that he has way more hit songs that more people are willing to give him credit for. The breadth of Collins impressive hit parade begins early with “Against All Odds” and continues via hit after hit after hit with tunes like “Don't Lose My Number," "You'll Be in My Heart," "True Colors," "Another Day in Paradise," "Two Hearts," "Sussudio,” and so on and so forth, and by now you get the picture. There’s a reason Collins, if you add in all of the hits he had as a member of Genesis, led the 80’s in terms of Top 40 hits. Live at Montreux 2004 features a predictable setlist if nothing else, but that’s to be expected, and by no way diminishes the overall product. All of those timeless classics and the DVD’s standout track, “In the Air Tonight” has yet to be mentioned – that’s when you know you have a lot of hits on your hand. The bonus footage is few but many - a 1996 concert performed by the Phil Collins Big Band, led by Quincy Jones featuring Tony Bennett on "There'll Be Some Changes Made.”  Suffice to say, Live at Montreux 2004 is a must-see for any and all fans, a DVD, a performance, that does exactly what it should – entertain you.