Looking Past The Human, the Canvas: A Conversation with Society’s Plague 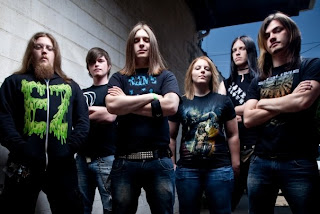 With their critically acclaimed 2010 debut the Human, the Canvas under their belts, Societys Plague have their eyes set solely on the future, a seemingly bright one that includes the bands sophomore release on the not-so-distant horizon. Hell, even Kate Latham leaving the bands ranks hasn’t rattled them as they now enter the studio energized and focused, a collective mindset you’d definitely want to be in while writing and recording new music. With the bands new work expected out sometime this year, the band is looking not to duplicate, but to build upon the success that The Human, the Canvas brought upon their shoulders. If you haven’t listened to the bands stellar debut, you should, so you can easily hear how high the band set the bar for themselves.

In an effort to catch up with Societys Plague, Get eXposed Music sat down with the band in order to dig deep for info on how it is coping with Kate’s departure as well as how the new record is coming along.

Get eXposed Music: A lot has happened since the last time I talked to you guys, most notably Kate (Latham) leaving the fold. Catch me up to speed on that situation. What led to that and how did the split go down? Was it amicable?
Societys Plague: Honestly, we all agreed it was best for everybody at the time. Things are fine between us, and Kate, and she is pursuing a career in sound engineering. While some of us still remain in contact, we all wish her the best in her future endeavors!

GEM: Tell me about Kate’s replacement.
SP: Well, she’s from Taiwan, has four gigs of memory, and a solid state hard drive, but that's all we can say for now (laughs).

GEM: Moving on, you’re working on your second album – tell me about how that process is going.
SP: We're about four songs in on writing, and hopefully gonna pick up and finish the rest this spring. We're actually releasing a full demo for the new song "Fear Is Failure" in a few weeks, so we hope that goes over pretty well.

GEM: Have you decided on a producer? You went with renowned producer Ben Schigel the last time out, any thoughts of bringing home back aboard?
SP: As of right now though, no plans for who's gonna produce it. BUT! We're accepting applications! (laughs) 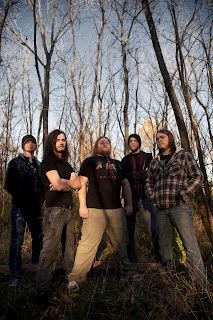 GEM: How about a release date? Anything in mind? Even a guestimation will suffice.
SP: Uhh, 2012. Somewhere in there. Yeah.

GEM: And how about the new albums sound? Your debut, the Human, the Canvas was very well received among critics and fans alike. Should we be expecting an album similar in sound to that with your upcoming new release?
SP: Well, nobody wants to write or hear the same record twice, so we're very excited about this new record. Right now, it’s definitely sounding a bit more symphonic, and a substantial amount less “metalcore” (laughs).

GEM: What is inspiring the writing of the new release?
SP: The whole record is about Harry Potter and Burritos. We like burritos, a lot... seriously. (laughs)

GEM: Anything else you’d like to add while you have the floor?
SP: Thanks for catching up with us again! Can't wait to destroy 2012 with some brutal new songs and a lot of road time! Mike will be keeping a daily video blog on this tour, so keep an eye out for that!
Email Post
Labels: interviews societys plague