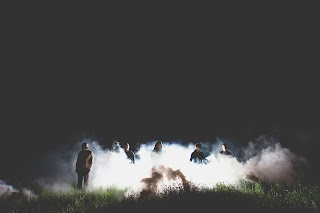 Charlotte, NC-based quintet HRVRD has signed to Equal Vision Records and has just completed the recording of their sophomore album.

The full-length album was recorded in Baltimore, MD with Brian McTernan [Circa Survive, Senses Fail] and will be released via Equal Vision Records, in partnership with Enjoy The Ride Records, later this year. A release date is yet to be confirmed.

HRVRD is comprised of vocalist Jesse Clasen, guitarists Lee Herrera and Jason Shaw, drummer Tim Cossor and bassist Garrett Leister. The band now officially joins the Equal Vision Records roster, after appearing as the special guest at the Equal Vision Records 2011 SXSW Showcase. Of the newly announced signing, Shaw states, "This may be the first announcement about any type of contractual agreement however we have been working with Equal Vision Records for a long while now and are excited to be publicly joining their music community. We as a band are overwhelmed with gratitude for their hard work and sincere support of our musical endeavors and are very excited about being part of the family."

The band, formerly known as Harvard, released their debut full-length album The Inevitable and I in 2009 and went on to release the self-produced album Interpretations in 2010, a five-track EP of re-imagined versions of songs off of their previous full-length. After a year and a half of writing for their upcoming album, HRVRD returned to Salad Days Studios in January 2012 to reunite with McTernan, who had also produced The Inevitable and I.

Shaw elaborates on their decision to work with McTernan again explaining, “Brian is amazing to work with because he expects the best out of you and is going to reciprocate that ideal in his part of the recording process. He wants every song to have an identity, which is something I personally want in the music I play…it’s nice to work with someone who's on the same page as you.”

On the new album, HRVRD’s haunting sound blends intricate and cinematic guitar riffs with dark, passionate lyrics and powerful, driving rhythms. Effortlessly encompassing the impressive technical qualities of underground progressive-rock and experimental outfits, while remaining accessible through honest, relatable lyrics, the fusion creates a full-bodied, dreamlike ambience filled with catchy, yet sonically sinister melodies. Clasen’s ethereal voice defies genres and offers vast vocal range with a wide spectrum of stylistic tones that stand out as notable without overpowering the outfit’s more than capable instrumentations. Their true talent shines not only in their ability to perfectly juxtapose driving and atmospheric elements in a complimentary manner but also in their use of those musical elements to guide and balance the lyrical storytelling.
Email Post
Labels: equal vision HRVRD signing