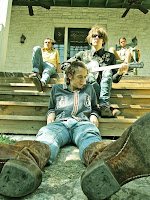 Mystery Jets' fourth album Radlands will be released on June 5th in North America. The album was recorded in Austin, Texas and Streatham, London and was co-produced by Mystery Jets and Dan Carey (Hot Chip, Franz Ferdinand, Emiliana Torrini).

Mystery Jets are Blaine Harrison, Will Rees, Kai Fish and Kapil Trivedi. On the making of the album Radlands, Blaine explains:

"We've always wanted to make a record in America and after touring Serotonin the time felt perfect to go and do it. Our first three albums were entirely conceived and recorded in London so going out to Austin felt like the furthest place from everything we knew. We arrived with a handful of songs, but one in particular felt like it captured the spirit of why we had come there. It was called Radlands (a fusion of the 1970s Terrence Malick film Badlands and Redlands, Keith Richard's Sussex estate), which is also what we named our studio; a big old wooden house on the banks of the Colorado river."