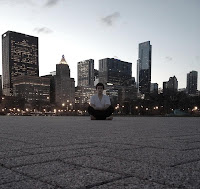 Mister Lies is the project of Chicago's Nick Zanca. Mister Lies will release its debut LP this Fall on Lefse Records -- in the meantime Zanca has released a collaborative EP with Different Sleep for the Absent Fever label which is available today as a free download. Mister Lies is also set to make its live debut next month in LA.

He originally hails from the suburbs of New Canaan, Conn., where he'll be heading back this summer to work on his debut full-length, which follows up this year's Hidden Neighbors EP and the new collaborative Mass EP with fellow Chicago producer Different Sleep. The Mister Lies LP should see release later this year via indie upstart Lefse (Neon Indian, Youth Lagoon, How to Dress Well).