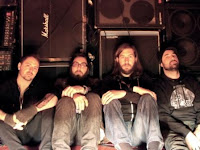 Century Media Records is proud to announce the worldwide signing of Vattnet Viskar.

Hailing from the small town of Plaistow, New Hampshire, Vattnet Viskar is anything but small. Formed in the fall of 2010, the band has quickly risen amongst the ranks of US black metal acts.

Vattnet Viskar's brooding take on blackened atmospheric doom metal perfectly mirrors their organic approach to their craft. Following a well received two-song demo in 2011, they have released a self-titled EP, available at their Bandcamp page, that has been met with praise from both fans and the press alike.

Not content to keep their blackened-doom alchemy confined to the studio, however, they back it up with a thundering live performance. Having already shared the stage with such titans as Black Anvil, Inquisition and Woods of Ypres, they have left their mark up and down the east coast with a seemingly endless string of shows-- and soon, Vattnet Viskar's name will spread across the rest of the country.
Email Post
Labels: century media signing Vattnet Viskar