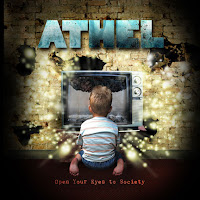 Windy City alt-rock trio Athel has hooked up with Mortal Music for the release of their full-length debut album, entitled Open Your Eyes to Society. The album, which was mastered by CKY's Chad Ginsburg, is scheduled for release on May 8th of this year.

The work you put into a band can often outweigh the benefits and rewards of the work itself but when all else fails there are always the few strong bands that pull through and end staying the course. Such is true of Chicago's power rock trio Athel. The band continues to meet that standard and raise the bar. The group is comprised of singer and guitarist Justin King, bass player Comron Fouladi, and drummer Christian Navarro. With the release of two EPs, coast-to-coast self booked tours, sold out hometown crowds, and a work ethic like no other, Athel continues to show their unmatched level of commitment and poise within this dog-eat-dog music business. "In 2011 we stayed on the road for a total of 310 out of 365 days driving from town to town to town and playing for anyone who would listen to us" states bassist Comron. "We lived off McDonalds and sleeping in a car for a year to promote this band."

Returning to the Midwest after this grueling schedule and the release of two EP's entitled Open Your Eyes and To Society respectively, Athel soon began rehearsals and recording sessions for their upcoming LP. Their hard work and self promotion caught the eye of industry veteran and SOiL bassist Tim King. Tim and his label partner Rob Such quickly signed the band to their co-owned label Mortal Music, distributed worldwide by MVD Distribution. "I've been in this business a long time" states Tim. "It is very rare to see a band with such passion and self motivated determination. I knew we had to give them a shot and bring them to the next level."

The band finished recording their debut full length album titled Open Your Eyes to Society in January 2012 and prepare for its May 8, 2012 worldwide release. Songs like the opening track "Radio" have become a new stamp of the bands sound. The song delves into the uncharted territory of the common person's mind. It has a strong hook and melody line that begs the question of the afterlife's mysteries. "I had a dream that I died and went to heaven and the melody I heard in the dream stuck with me until I woke up," Justin says. "It was so interesting and had a feeling to it that I hadn't heard before so what you hear essentially is the song from my dream."

The group is planning it's biggest statement to date with the release of Open Your Eyes to Society. It promises to be the strongest piece of music the band has ever written. Having Chad Ginsburg of popular rock band CKY master the tracks was the final finishing touch the record needed.