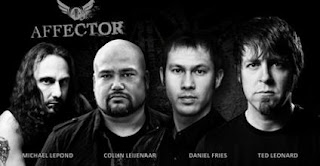 Drummer Collin Leijenaar comments on the signing: "We are thrilled to be signing with InsideOutMusic/Century Media. It is THE home for progressive rock & metal, and it feels very much like home to us! It has always been a personal dream of mine to release something on this label, and with Affector this dream has come true! I'm stoked about the future of Affector, and I hope the audience is too!"

This concept album ambitiously fuses dark, apocalyptic scenery with themes of hope and light. Heavy riffs and lightning fast solos beautifully offset more soft and fragile moments, throughout which the soulful singing of Ted Leonard embraces a wide spectrum of vocal harmonies. Drawing upon a diverse palette of musical influences, Affector seamlessly unites progressive rock/metal and orchestral minimalism. Affector is destined to appeal to fans of a multiplicity of forward-thinking acts - from Dream Theater, A.C.T., Symphony X and Darkwater, to Queen and Rush.

Additional details about Affector's upcoming album, Harmagedon, will be announced in the coming weeks.