Sully Pulls the Plug, Turns Down the Lights 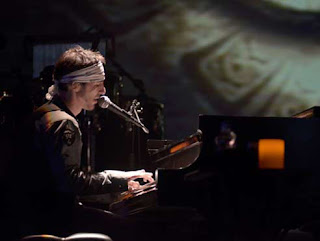 Even though I knew what to expect for the most part as Sully Erna, sans Godsmack, brought his travelling troubadour solo show back to the historic Riviera Theatre, the concert experience was no less exhilarating. Erna was masterful both with an acoustic guitar in his hands and behind a piano as he regaled the sellout crowd with stories of his childhood, his upbringing and family, but most of all his lifelong passion for music. Now, for those of you who caught Erna last year on his Avalon tour, this was not the same, though you knew what you were in for if you, like me, caught Erna on his first solo tour a few years ago at the Bears Den at the Seneca Niagara Casino. Regardless, there was no shortage of goosebumps up my arms and chills down my back as Erna tore, well sort of, through a number of songs from his impressive musical canon, be it Godsmack (“Alive,” “Serenity,” “Keep Away”) or his solo material (“Eyes of a Child,” “Broken Road,” “Until Then…”). Erna also played a new song, “Falling Through Glass,” for the first time ever, a song that falls in line with most everything off of Avalon. Erna also took the time to take questions and hear stories from the crowd, most of which aren’t worth mentioning, and spent a good portion of his talk time telling the crowd that he wanted to “liven the mood” and “stop writing depressing music.” All in all, Erna was brilliant, as expected, during the outing, which culminated in Erna closing the show with a cover medley (no spoilers here folks! – go see the show) which brought the entire crowd to its feet in order to feel the true power of music, which Erna admitted was his goal from the outset. Though it was a near mirror image of a show I’d previously seen, I’ll never get sick of seeing Erna ply his craft, acoustic or electric, Sully Erna or Godsmack, plain and simple.
Email Post
Labels: concert reviews godsmack riviera theatre sully erna