The Learning Curve: Slaves On Dope 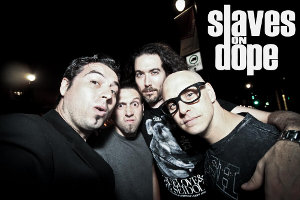 Listen, I want to assure you that Slaves On Dope aren’t spotlighted in this column because they’re close friends of ours here at Get eXposed. OK, while that doesn’t exactly hurt, it’s not the only reason. Their latest long player Over the Influence, the band’s first release since reforming back in 2009, is also a big reason. With a new bassist (Sebastien Ducap) and drummer (Peter Tzaferis) filling out the ranks alongside SOD mainstays Jason Rockman (vocals) and Kevin Jardine (guitar), the band sounds as good as ever, and, with Over the Influence, have picked up right there they left off with 2003’s Metafour. If you bailed on the band when they went on hiatus a near decade ago, first, shame on you, and second, it’s time to get back on the bandwagon.