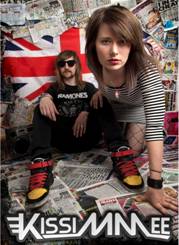 With attractions such as T4 On The Beach, Weston Super Mare is rapidly becoming a town of musical wonders, so there is no more of a fitting place for rock band Kissimmee to kick off their career. Drew Wale and Leigh Alexandra came together 8 years ago when they met at college and realized their love for 80's rock was the foundation of their chemistry. A natural ability to write big pop choruses was the basis of their songwriting partnership, captivating a local audience and selling out the town’s biggest rock venue on a regular basis.

Kissimmee were soon spotted by Busted songwriter/producer Michael Raphael and offered an opportunity of a lifetime to record an album with him in LA. On returning to the UK, Kissimmee's pop album was introduced to the major labels but it seemed that their ship had already sailed and indie had claimed pop's mass audience.

Kissimmee presents their debut single "This City" which showcases their ability to infuse genres of classic rock and pop punk.


"This City" is set for release at the end of May, but for now Kissimmee is giving away another track "The Cure" as a free download and a taste of what they have to offer.