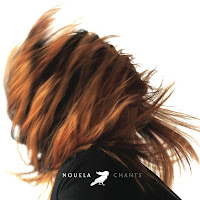 Chants is the debut album by Seattle multi-instrumentalist/singer Nouela. Born to Norwegian & Korean parents, Nouela Johnston spent the first 11 years of her life living in Korea and learning to love music. It is no accident that the musical craft and composition that Nouela displays on Chants feels like the endeavor of an experienced singer and songwriter; the prologue to Nouela's career as a songsmith reveals it all.

Nouela spent her teens and early twenties fronting bands (Mon Frere, People Eating People) and cut her musical teeth recording and touring with both local Seattle groups and national acts (The Fall Of Troy, Say Hi, Schoolyard Heroes, Cursive). After having worked with a diverse stable of musicians & producers including members of The Blood Brothers and Minus the Bear, Nouela decided to streamline her creative processes and play nearly every instrument herself on Chants, even going so far as taking on the role of co-producer.

The sonic terrain of Chants appears like the dark landscape of a musically Darwinian island that mirrors Nouela's upbringing: an enigmatic and isolated place where Carole King's Tapestry has been allowed to co-mingle for countless generations with PJ Harvey's To Bring you My Love and Fiona Apple's Tidal. What emerges is a unique body of music that is both ambitious without being self-indulgent and vulnerable without being piteous. Chants is a musical flood of feelings and emotions born from the enduring toil of the human condition.

Nouela will release Chants via The Control Group on June 12.