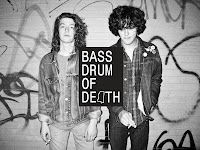 Bass Drum of Death is a two piece band from Mississippi composed of John Barrett on guitar and vocals and Colin Sneed on drums. Together they make blown-out, blazing songs. Their debut LP was released last spring on Fat Possum Records. John wrote and recorded the whole record himself using drums, a guitar, a USB microphone, and a computer before teaching Sneed to play drums for the live show and beyond. The songs are about drugs, religious girls, panic attacks, mild to severe depression, Elvis appearing in your dreams and giving you advice, gravity bongs, and the devil living inside your brain.

MP3: "I Wanna Be Forgotten" - http://soundcloud.com/3qtr/i-wanna-be-forgotten-bass-drum/

Now, with Spring kicking into full gear, Bass Drum of Death is gearing up to release a 7" as well as a split 7" with DZ Deathrays through 3|4 (3qtr). Then on the precipice of Summer, Bass Drum of Death and DZ Deathrays are hitting the road bringing a dose of the things we love about summer -- long nights, adolescent debauchery and rock and roll -- to a city near you. The two bands won't stop until they've completed a lap around the country and Canada too. Don't miss this grungy party when it hits your town.